Most of our team have worked together for several years and each of our consultants have developed extensive experience in areas of speech sound development, childhood developmental language disorders, speech dyspraxia/ childhood apraxia of speech, auditory processing, hearing impairment, developmental delays, cerebral palsy and autism. 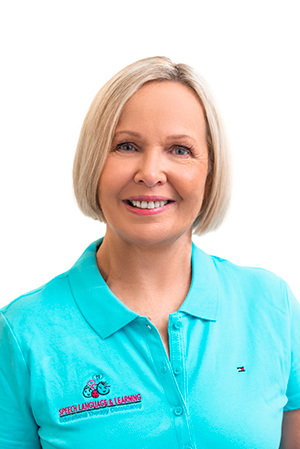 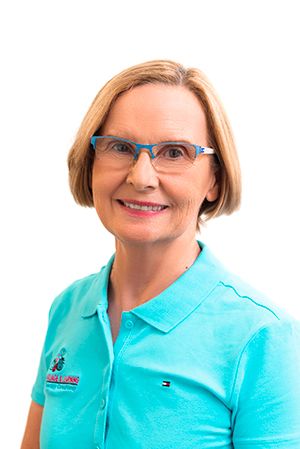 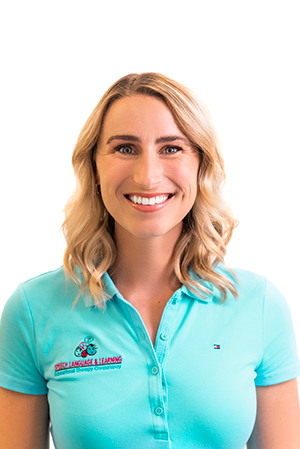 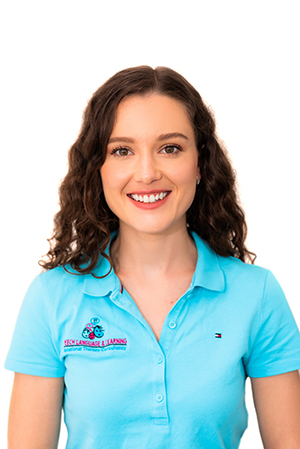 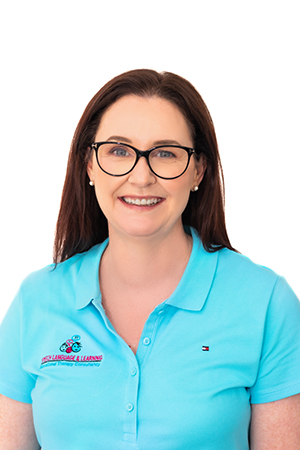 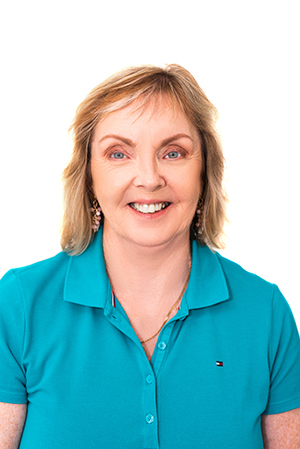 Sue is the Founding Director of Speech Language & Learning which has been operating since 2004. She has over 40 years of experience working with a wide range of clients and in management positions. Speech Pathology positions held include the Sydney Children’s Hospital, Speech Pathologist In-Charge, Queensland Cerebral Palsy League, (now known as Choice Passion Life), the Pre-School for Deaf, Brisbane and CHI.L.D. Association/ The Glenleighden School (now known as Speech and Language Development Australia / SALDA) (Senior Speech Pathologist & Outreach Manager). Sue was also on the Board of Directors of CHI.L.D. Association/ SALDA from 2015 to 2018. She is a co-coordinator for the Speech Pathology Australia -Queensland Private Practice Network and sits on the executive of the Queensland branch of Speech Pathology Australia. 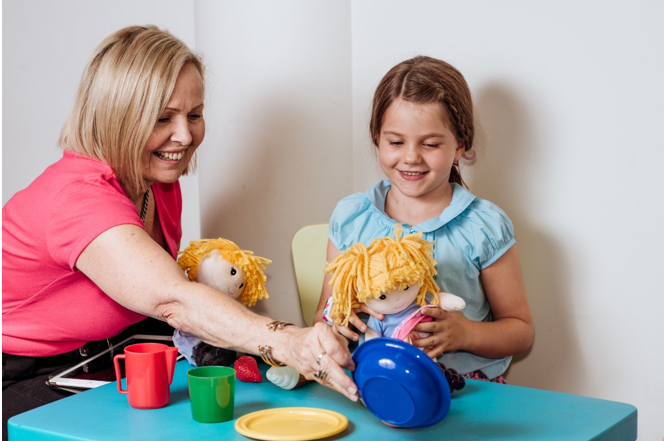 Sue is highly experienced in assessment, diagnosis and treatment of children and adolescents who have speech and language delays and disorders, childhood apraxia of speech/ developmental verbal dyspraxia, autism spectrum disorders, attention deficit and auditory processing disorders, oral motor, eating and drinking difficulties, hearing impairment, cerebral palsy, neurological head injuries as well as literacy and learning difficulties. She has a particular interest in childhood apraxia as her Master’s degree research project was based on researching a program she has developed to facilitate speech and literacy development for these children from an early age.

In 2004, Sue was invited to consult and treat children with speech, language and literacy difficulties in some private schools, as she was starting her independent practice. This has continued and grown, with more schools acknowledging the assistance we can provide for children in educational settings, and our ability to network with teachers and support staff in understanding and supporting each individual student’s area of difficulties. She has developed a number of programs which reflect evidence-based research and these have become specific to SLL consultants, particularly in treating childhood apraxia of speech, developmental language disorders and severe literacy difficulties.

As the Australian trainers of a well-known, popular UK language program, the Derbyshire Language Scheme, Sue and Janet Eales (Learning Steps- see Our Network) have formed ‘Language Literacy and Learning’ to provide training and in-service to speech pathologists and other education and health professionals and parents wanting to use ‘the most popular commercially produced language program for children under 7 years in the UK ‘(Better Communication Research Project, 2008).

In 2013, Sue and Janet founded an app development company, called Language and Learning Steps, gaining entry into the University of Queensland / Uniquest iLab’s Germinate program where they developed their first language app, ‘Key Word Kids’. This app is a language program in an app as it reflects the principles of the Derbyshire Language Program, based on the notion of Key Words used in a sentence, that a child is required to understand or produce. They now have a 2nd app, called ‘Key Verbs with Steffy and James’ which helps children understand and use past tense action words appropriately. Both apps are very popular in Australia and in a range of English-speaking countries. They are currently finalising a new Key Word Kids app which they hope to release late in 2022

Anne is widely experienced in the assessment, diagnosis and treatment of children who present with speech and language delays and disorders,oral motor/ eating and drinking difficulties, as well as literacy and learning difficulties.

Anne has a particular interest in working with children who have Developmental Language Disorders and Childhood Apraxia of Speech. She has previously worked with Sue at Speech and Language Development Australia’s Brisbane based school, Glenleighden working with students at all levels of their education to achieve their speech, language, and educational goals and reach their potential.

She has over 40 years experience working in this area with children aged from early childhood to young adults. To this end, she has completed the training in a variety of program areas including the Derbyshire Language Scheme, Literacy Programs including Sounds Write and Lindamood programs, as well as the Sensory Oral Sequential (SOS) program for children presenting with eating difficulties.

Anne is trained and very experienced in the use of signed speech and language, with Cued Articulation, Paget Gorman Signing, and Key Word Sign. We are delighted that Anne has joined us as she has a wealth of knowledge which she is generously always happy to share with her clients and families who benefit greatly.

Sarah is an amazing team member and her contribution to SLL has been warmly welcomed, initially in a Full Time Locum position then as a Part-Time Consultant. She travelled and worked overseas from 2016 to 2018 but returned in 2019 to work as a part time consultant. Sarah graduated as valedictorian of her Therapy cohort, with a Bachelor of Speech Pathology (Honours 1) from the University of Queensland, completing research in the area of head injury following sporting accidents. She was awarded the Speech Pathology Australia Student Award for 2014. Sarah has additional certifications in BLADES language training, the Lidcombe Program for early stuttering and SALT language analysis and SOS feeding. 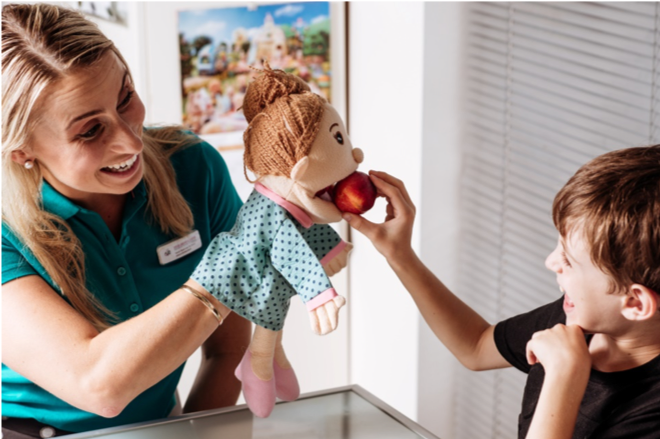 She says she is passionate about early intervention for children & enjoys working with children in the areas of speech, language, literacy & fluency. Her particular areas of interest are paediatric brain injury & paediatric feeding/swallowing.

Sarah has had experience in working in regional and rural Queensland working alongside other health professionals & schools to offer Speech Pathology services to families & their children. In this role, Sarah also worked with indigenous children and their families. She loves working with children & their families to empower them to be effective communicators.

Megan graduated from the University of Queensland with a Master of Speech Pathology Studies. She has a strong passion for supporting children and young people to maximise their communication skills. Megan is a fun-loving and conscientious therapist who is committed to providing quality speech pathology services. She strongly believes in partnering with families and their broader network (eg. other professionals, educational team) to provide holistic intervention and support.

Megan has experience in assessing and providing intervention in areas including: Receptive and expressive language disorders and delays; Speech sound disorders; Literacy – phonological processing, reading and spelling. She has also had experience working with Augmentative and Alternative Communication (AAC), and pragmatic language and social communication skills. 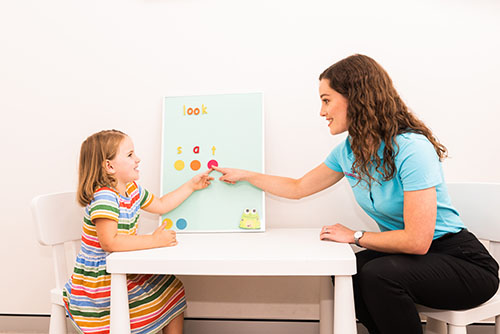 Megan has also completed further training in early intervention for children with Autism Spectrum Disorder (ASD) and is a certified member of the Hanen Centre, having completed training for ‘More Than Words’, The Hanen Program for Parents of Children with Autism Spectrum Disorder. Megan has also completed training in narrative language development administering the Story Grammar Marker approach (MindWing Concepts) to narrative language intervention, and she has also recently completed professional development focusing on pragmatic language and social communication skills.

Megan has been warmly welcomed to our team with her wide range of skills to support therapy sessions, her enthusiasm, understanding and kindness- she is much loved by her clients, young and old, and their families!

Joanne has more than 25 years of experience working with young children as a school teacher, literacy coach and more recently as a speech pathologist. She recently received First Class Honours for her research paper investigating the acquisition and assessment of vocabulary in Australian children. She has been well known to Sue from her teaching years, so has been enthusiastically welcomed to our team in her new Speech Pathology career. She is passionate about supporting young people to reach their full potential and grow in independence and confidence.

Joanne has extensive training and experience working with children’s literacy development and language comprehension using the ‘Lindamood Programs’, ( LIPPS, Seeing Stars and Visualising & Verbalising) in addition to structured synthetic phonics programs. She has worked closely with children who have significant difficulties in literacy learning, and her patience and reassurance allows children to progress confidently. Jo complements our team perfectly with her friendliness and warmth, and wealth of experience. 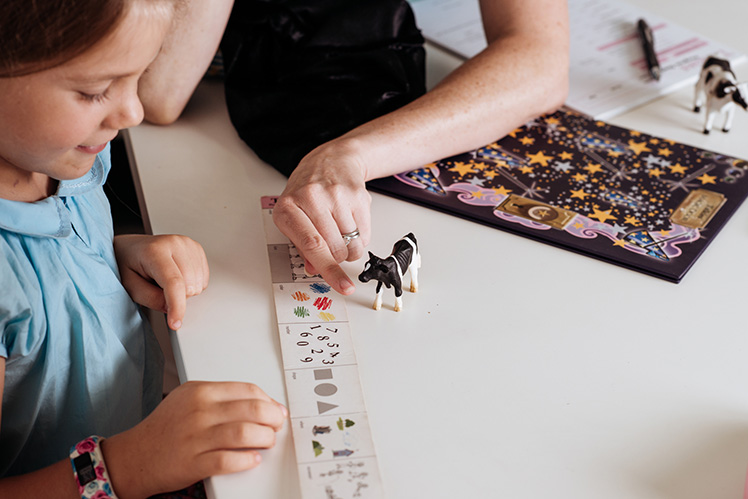 Kym is our lovely Client Care Manager with a warm, welcoming smile. As a family person, she helps us create an inviting environment for our team, families and clients, whether it be the first time or ongoing
sessions. She is available via email or phone (voice or text), advising patiently on the availability of our Services and all extended information on our invoicing processes for each individual level of care.

Kym has extensive experience in customer service, accounting and business throughout the medical, aged care and sales fields during her administrative and Personal Assistant career. Her vast experience extends to her professionalism and efficiency when dealing with sensitive issues of client care with our valued families.
Children and parents love greeting Kym on their arrival in reception, often with a happy chat or a cup of tea if needed. She is readily contacted for quick responses to any questions regarding our Practice and is ready to help with any problem-solving, should it be required.

Speech Language Learning are a team of Brisbane Speech Pathologists. We provide a range of speech pathology programs at our Clayfield office as well as remote/regional tele-health and in-school services.